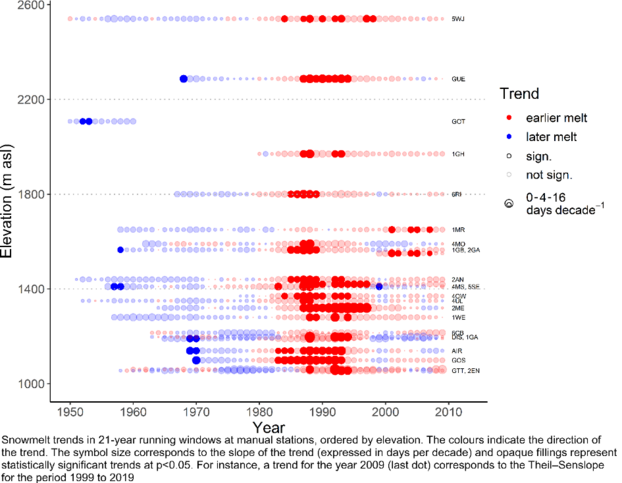 Maria Vorkauf, Christoph Marty, Ansgar Kahmen and Erika Hiltbrunner combined manually acquired long-term time series measurements of snow depth in the Alps with newer data from automatic measurement stations above 2000 m asl to understand changes in the timing of snowmelt over a range of elevations. Their data shows that snow depth in the Alps has trended towards earlier onset dates of snow-free conditions between 1000 and 2500 m asl, with snowmelt dates advancing at an average rate of 2.8 days per decade between 1958 and 2019. These trends were also punctuated by shorter term fluctuations, including a pronounced surge in the late 1980s and early 1990s. The study also contained a modeling component that simulated changes over the 21st century based on projected anthropogenic carbon emission scenarios. These predictions show that increased winter precipitation will not compensate for rising temperature and thus, snowmelt dates will advance at a similar speed at all studied elevations. By the end of the 21st century, snowmelt dates may occur up to six days earlier each decade (high-emission scenario RCP8.5), prolonging the alpine growing season by one third of its current length.