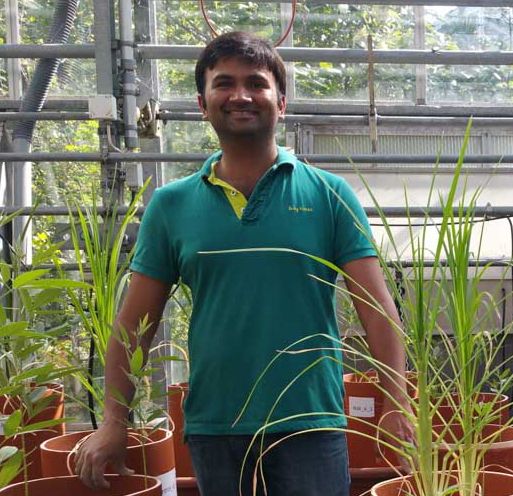 Food security for growing population and achieving the zero hunger target by 2050 is a major challenge for mankind. Sustainable intensification of agriculture, i.e. increased food production without causing environmental damage has been foreseen as the way forward to address this challenge. In this study, we tested a legume – millet intercropping system based on bioirrigation where a deep-rooted legume brings up the soil moisture from deep soil layer to the topsoil layer and soil moisture is further transferred to shallow-rooted millet through a common mycorrhizal network (CMN). We conducted a series of pot experiment inside the greenhouse at University of Basel and field trials at two different experiment sites in southern India to test the efficacy of bioirrigation based legume – millet intercropping system. The results from pot experiments showed that pigeon pea (legume plant) brings up the deep soil moisture to the topsoil layer, and CMN plays key role in facilitating bioirrigation. During drought period, water-relations of finger millet (millet) was supported and finger millet in intercropping treatments (with CMN) were able to tolerate drought period. The field trials demonstrated that the optimal spatial arrangement for legume – millet intercropping is row-wise (2 rows of legume : 8 rows of millet) plantation of crops which produced significantly higher yield (at both experiment site) than monoculture and intercrop designs with within row plantation of legume and millet. Within row plantation of legume and millet was only effective at one site and produced similar yield as row-wise (2:8) intercropping treatment. We envision that sustainable intercropping on the basis of our bioirrigation model will help to design appropriate intercropping system especially for rainfed areas that could provide sustainable food security, particularly for the marginal farmers in arid and semi-arid tropics.